What battles other than the famous Battle of Yuldong were fought by the Philippines in the Korean War? And what was the first and last Filipino battle in this war? 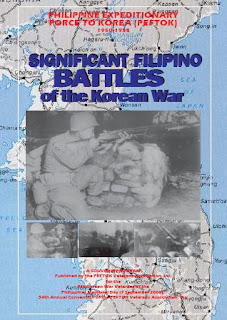 (1950-53) are highlights of the magazine, “Significant Filipino Battles of the Korean War,” edited by Art Villasanta, Korean War historian, and issued during the recent celebration of the 9th Korean War Veterans of the Philippines Memorial Day.

The magazine recounts five of the epic battles fought by the Philippine Expeditionary Force to Korea (PEFTOK) against the communist Chinese and North Koreans. It is the first published work about Filipino battles in the Korean War.

Among these little know victories is the “Battle of Miudong/Syngue” fought in Nov. 1950, the first battle—and the first combat victory—won by the Philippines on foreign soil in its history. The battle was won by the 10th BCT commanded by Col. Mariano Azurin.

The work also sheds light on the last battle fought by the Philippines in the Korean War. This was another victorious defense of Christmas Hill by the 14th BCT under Col. Nicanor Jimenez. This last battle was won just two day before fighting in the Korean War ended on July 27, 1953.

The magazine tells the story of the longest PEFTOK battle: a bloody four-day fight for Hills Arsenal and Eerie in June 1952. This battle, also called the “Rizal Day Battle for Combat Outpost No. 8,” was a victory for the 19th BCT under Col. Ramon Aguirre.

On June 21, the morning after the vicious night battle that saw the final defeat of the last communist Chinese assault, a group of exhausted Filipino soldiers climbed Arsenal Hill and planted the Filipino flag on the summit. This act of victorious defiance showed the Chinese they had indeed lost the battle, and that Combat Outpost No. 8 remained firmly in Filipino hands.

Some 7,500 officers and men of the Philippine Army served in Korea. Organized into five battalion combat teams (BCTs), PEFTOK lost over 100 men killed and a further 400 wounded in action defending South Korea against communist invasion. The Philippines was among 16 member countries of the United Nations led by the United States that sent combat troops to the war.


The magazine was published as a souvenir program by the PEFTOK Veterans Association, Inc. (PVAI).
Posted by Art Villasanta at 5:15 PM

sir where can we get a copy of this magazine? thanks.

My father was one of service man who served 1953-1954 at ponyang.. My mother never really share anything about it and never seen receive any if benefits beside being silence all through the years until I did my search 6 years ago. My father passed away 1969 at the age 39 without notice my mother suffered a silence treatment and I wonder why. I guess right when a martial law came things are never the same. We the sibling we want my parent to be notice for thier courageous on the fight for freedom. Ghovind