AMERICA'S MOST WANTED man, Osama bin Laden, avoids using wireless telephones. Some Western analysts say it's because he fears American spies could be listening to him with sophisticated eavesdropping devices.

Others believe it's because he remembers all too well the fate of another Muslim leader who paid with his life for talking too long on a wireless telephone.

Just five years ago, on the night of April 21, 1996, Dzhokhar Dudayev, president of the rebellious Muslim republic of Chechnya and the most wanted man in Russia, stepped out of a small house in a forest some 20 kilometers from the Chechen capital of Grozny to make a phone call.

He switched on his Inmarsat (International Maritime Satellite) telephone and called up Konstantin Borovoy, a liberal deputy in the Russian Parliament who served as his Moscow liaison.

According to Borovoy, he and Dudayev were discussing peace terms being offered by Russian President Boris Yeltsin to end the costly war. The two-year war for independence being waged by the predominantly Muslim republic of Chechnya began in December 1994 and was going badly for the Russian army.

Dudayev, a former general in the Soviet air force, had thwarted three previous attempts at detection by not talking too long on his satellite phone. Russian signals intelligence (Sigint) aircraft such as the electronics-packed Ilyushin IL-76 had tried in vain to lock onto Dudayev's phone signal since January.

This time, however, Dudayev and Borovoy had to talk at length because the peace offer was of vital importance. The Russians had no Sigint aircraft in the air that evening.

But one low flying Suhkoi Su-25 ground attack aircraft was in the vicinity. As the Su-25 circled, its pilot received the coordinates of Dudayev's location.

The Russian pilot quickly "painted" the target coordinates with his laser designator and fired his supersonic air-to-ground missiles. One missile hurtled toward Dudayev who was still talking on his satellite phone.

Dudayev's assassination, which the Chechens blame on Russia's secret service, would not have been possible without the crucial information pinpointing Dudayev's location. Evidence has since suggested that the source of that information may have been an American Sigint satellite.

The Americans strongly deny any role in Dudayev's death. Some Western military analysts, however, argue that the Russians didn't have the equipment to mount such a sophisticated attack.

They suggest that a Western satellite, most probably American, supplied the vital information that led to Dudayev's demise.

The "likely suspects" in the Dudayev episode are the "Chalet" and "Magnum" Sigint satellites operated by America's super-secret National Reconnaissance Office (NRO).

This agency, whose existence was only officially acknowledged in the 1990s, operates all the satellites used by different agencies for taking pictures and listening to transmissions. Twelve Chalet and Magnum satellites are believed to be operational, and may have been secretly reinforced by others since the Sept. 11 terrorist attacks in New York and Washington, D.C.

From their orbital stations 22,000 miles in space, they "listen" to the electromagnetic signals of millions of low-powered radio and mobile phones every day and relay this data to supercomputers at the US National Security Agency (NSA) for analysis.

The four or six Magnum satellites, whose umbrella-shaped receiving antennas are 100 meters in diameter, are equipped with "feed horn" arrays that allow them to intercept signals from widely different locations.

During the 1991 Gulf War, one of the Magnums had a feed horn intercepting Iraqi communications in Kuwait, Baghdad and nearby locations at the same time. Under favorable conditions, these satellites can apparently keep track of individual mobile phone conversations, as well.

The Chalet satellites, of which four are said to be in operation, are older versions of the Magnums and are supported by a much older Sigint fleet of six satellites that goes by the name of Rhyolite.

The alleged use of either a Chalet or Magnum satellite in the Dudayev episode illustrates the extreme vulnerability of electronic communications to clever spies such as the NSA.

The week after Sept. 11, an unknown number of America's Sigint satellites were reported to have been "re-tasked" to hunt down Bin Laden. Previously, many of these satellites kept watch over America's strategic competitors such as Russia and China and avowed enemies such as Iraq.

It is apparent that the US military hopes their Sigint satellites will intercept phone conversations of Bin Laden or his network, a task made easier by the small size and minimal communications in Afghanistan. Any electronic emitter not proven to be from a friendly source can be assumed to be hostile and thus a target for tracking and analysis.

Bin Laden and al-Qaida cannot maintain radio silence indefinitely. This was proven when Bin Laden called his mother on his satellite phone, a call that was probably intercepted by a Sigint satellite and later revealed to the media.

The disclosure of this taped intercept apparently made him more cautious about making phone calls and caused him to rely more on human couriers to transmit orders to his widely dispersed terrorists.

Some satellite experts, however, contend that the incredible capabilities of America's Sigint satellites may not be as effective when used against small, dispersed bands of terrorists who make it a point to maintain radio silence. The satellites work best against large organized units such as an enemy army that cannot function effectively without electronic communications.


An enemy with sparse communications, or who practices good signals security, is less vulnerable to signals espionage from space. Locating an electronically silent Bin Laden via Sigint thus becomes dependent on lucky intercepts.

Complementing America's Sigint satellites in Afghanistan are airborne Sigint systems that include the U-2R and TR-1 spy planes and RC-135 Rivet Joint aircraft that carry passive electronic sensors for monitoring electronic emitters such as satellite phones.


The Sigint satellites are part of an overall intelligence gathering campaign that also embraces imaging intelligence (Imint) satellites whose cameras can identify surface objects less than three inches in size from 300 miles up while traveling at more than 20,000 miles per hour.

The newest "Keyhole" Imint satellites also have heat-sensing infrared capabilities that allow them to see targets on the ground at night.

A new generation of in-orbit radar imagery satellites, called "Lacrosse" or "Vega," also make it possible to obtain high-resolution images of the ground even through heavy cloud cover.

Electronic intelligence (Elint) satellites are also included in this intelligence mix. A primary Elint program is "White Cloud," a satellite constellation that is the US Navy's principal means of over-the-horizon reconnaissance and target designation for its weapons systems that include surface-to-surface missiles.

It is estimated that the United States has over 200 military satellites in orbit with four to five being added to this number every year. These satellites cost the Americans over $100 billion, according to some estimates.

Sigint, Imint and Elint satellites provide the long-distance ears and eyes of a combined effort to ferret out Bin Laden and al-Qaida in Afghanistan's inhospitable terrain. They give the United States and its allies a significant technological edge, but will not produce victory in Afghanistan.


Art Villasanta is a major contributor to a weekly on-line magazine about Asian satellites. He has created a website for Filipino veterans of the Korean War.
Posted by Art Villasanta at 7:29 PM No comments:

Who will be the first real Filipino astronaut? 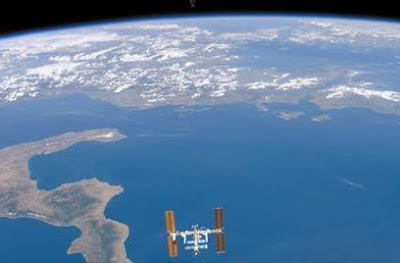 THE ACRONYM FOR the Axe Apollo Space Academy, which is AASA, pretty much spells out what the Filipino who “wins” this contest can expect from it.

“AASA,” which is Filipino for the verb “to expect,” is an apt acronym considering the questionable claims Unilever puts forward for this marketing gimmick. The Filipino who survives the voting and vetting process will do well to consider these realities:


Now before the geniuses at Unilever and fans of this gimmick go apoplectic at my apparently unpatriotic claims, I’d like to make one point perfectly clear.

I’m all for having a Filipino astronaut. One thousand percent in favor.

Between then and now, I’ve published a lot of stories about space, spaceflight and satellites in the Inquirer and in websites that deal with space.

I’ve said it before and I’ll say it again: our first astronaut should be a Filipino citizen our race can be proud of. This national pride will stem from the exceptional achievements of this person.

In the traditional sense, an astronaut is almost superhuman.

From the start of human spaceflight in 1961 until the advent of private spaceflight in 2004, the word astronaut held godlike connotations. And with good reason.

These men and women were mature individuals with high intelligence, high physical capabilities, extensive experience or a combination of these qualities. They trained at becoming astronauts for months or years.

They were some of the best human material their nations had.

Does anyone think a Filipino who simply pops into space for less than five minutes, and who receives about a week’s training before this “spaceflight” can be called an astronaut?

Will this person make you proud to be a Filipino?

And when someone asks you what space program launched the first Filipino astronaut into space, can you proudly reply, “He was sent into space by a men’s underarm deodorant!”

Will that make you proud to be Filipino?

The very thought of it makes me cringe.

Space is no place for “pa-pogian” winners of a text-voting contest who’ll be passengers aboard a “space plane” that hasn’t even made its first spaceflight as of this writing. The contest will make you a guinea pig, not an astronaut.

And the answers to the “aasa” questions at the beginning of my story:


Do you honestly want to be remembered as the first Filipino “astronaut” in these laughable circumstances? It’s up to you.

But, hey, you won and beat a million other guys worldwide for the chance to ride into space. That’s a great achievement--but it doesn't make you an astronaut.

The first real Filipino astronaut should make us proud to be Filipinos.

Now, who will be the first real Filipino astronaut?
Posted by Art Villasanta at 8:54 PM 2 comments: