ON WHAT SHOULD have been another pointless day, he found himself consumed by an intense surge of joy that bent the noonday light into a magical sphere enclosing them as they walked.

Inside this sphere that shut out the world, he heard nothing save the wondrous echo of her voice as it sang in his mind. They talked the mundane chatter of careless college students: the exam they hated; the Carpenters and Smokey Robinson; their graduation just months away.

Even the impending sadness of parting from her--perhaps forever, if he let it--seemed a pointless fear at this singular moment as she walked with him, seemingly his shadow.

He knew he could now tell her. He could, if he could keep his madly pounding heart from battering his brain senseless, making him an idiot powerless to speak those beloved words he had always wanted to say to her this past year.

He knew this was the last chance. He knew . . . he knew Fate would abandon him completely unless he bravely seized this singular moment.

The realization frightened him no end and, on this bright and magical day, made him more aware of the unworthy monster he knew he was.

She was the brightest girl in class and, to his spellbound eyes, the loveliest. He drowned happily in joy again and again as he stared at her so close beside him.

She turned that lovely face to him, saying words that shattered in the air before reaching his ears. He smiled modestly and saw nothing else on what should have been another pointless day save her delicate face whose cheeks were a bloom of pink; her lips an inviting crimson line.

Inside the university museum, their talk turned to the dank and musty surroundings. He stayed close beside her, wanting to hold her hand but afraid she would take offense and run away.

She paused before the cabinets housing stamps from centuries past, and asked him in a tone both surprised and hurt, why he disapproved of the way she dressed.

The shock of this unexpected remark struck a deathblow to his already senseless brain. He stood mute and bewildered, groping for words that would not forever destroy this singular moment.

She saw his confusion, turned her back to him and walked ahead towards the statues of saints centuries old, half hidden in the shadows. He followed like a wounded dog, commanding his numbed brain to compose a reply that would not add to his humiliation. 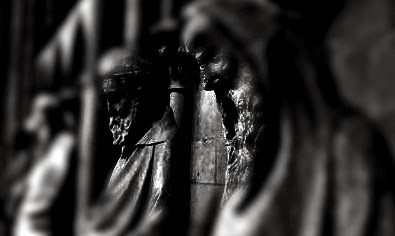 She turned that lovely face to him and asked if he would make the honors list this year.

No, he replied. He'd still be a few points shy, but he knew she would. Congratulations, he said.

She smiled modestly and suggested that perhaps their adviser could help his grades further along. She would talk to her if he wanted her to; she was her favorite.

"You shouldn't do these things for me," he pleaded. "I don't have the right to ask anything of you . . .

She gazed at him, surprised by his chaotic replies. But she at last knew that he did feel strongly for her. And that this confusion was another of his muted ways of conveying the similar emotion she had long felt for him but which she had kept in check.

She drew closer to him and let her right hand touch his glistening forehead. She ran her warm fingers slowly along the side of his face and over his scarred cheek.

He flinched, ashamed, and fought off the consuming urge to lift her hand away from his face.

He embraced her tightly, suppressing his tears.

She parted her lips and they kissed passionately in the faint light--amid statues of saints long dead staring grimly at them.

Posted by Art Villasanta at 1:09 AM No comments:

The Silence of the Weak

On March 14, 1988, 20 months before the fall of the Berlin Wall signaled the death knell of communism in Europe, two of Asia’s four communist states decided to fight a naval battle over crude oil.

Communist China and Communist Vietnam sent their navies to the waters off our Kalayaan Municipality (part of the Spratly Archipelago) to seize what were apparently insignificant lumps of coral jutting out of the South China Sea. 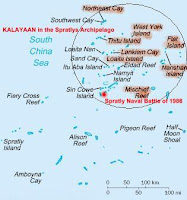 But it wasn’t these calcified remains of billions of sea creatures China and Vietnam were after. It was what they believed lay buried tens of kilometers beneath these marine skeletons: the world’s fourth largest untapped reserves of crude oil and natural gas.

China calculates the Spratly’s oil and gas reserves at 18 billion tons compared to the 13 billion tons held by Kuwait, which constitute a tenth of the world's proven crude oil reserves. China also estimates the South China Sea holds combined fishing and oil and gas resources worth over $1 trillion.

And there’s also the Spratly’s strategic value to world trade: one fourth of the world’s crude oil transits the South China Sea on which it sits. More than 60% of China’s oil exports are transported by sea, most through the South China Sea.

It’s hardly surprising China fought a short but mutually damaging naval battle against her “fraternal neighbor” Vietnam in 1988. China and Vietnam claim the entire Spratly Archipelago, and have garrisoned some of those coral lumps to reinforce their territorial claims.

On March, 14, 1988, 10 Vietnamese soldiers planted their national flag on Johnson South Reef, a coral rock the Chinese claimed as their own. The 40 responding Chinese troops tried to haul down the Vietnamese flag.

What lessons?
What is disturbing about this sea battle, variously called “The Spratly Islands Naval Battle of 1988” or the “Johnson South Reef Skirmish,” is that it occurred inside Philippine territory.

So where was the Philippine Navy, protector of our waters and territorial integrity?

It’s a question still asked to this day. But since naval combat in 1988 was a game of numbers (the side with more firepower usually won), there was probably nothing our outgunned navy could have done to prevent this clash. And why prevent it at all since the antagonists—two communist states—were not on our side?

The lessons we should have learned from this incident have remained lessons because, 21 years on, the Philippines has not found the financial and material resources necessary to make the Navy a credible deterrent against a stronger power.

Yes, our navy does have an ongoing modernization program. But this means replacing old ships by 2017, so that by 2020 the Navy can boast of itself as a strong and credible navy the Philippines can be proud of.

The new ships that will join the Philippine Fleet will strengthen the Navy’s amphibious landing capability. The Navy’s key mission today is the rapid transport of Marines and Philippine Army troops to military hot spots in Mindanao and Sulu, or wherever desired.

In May 2009, the Navy took delivery of three new multi-purpose vessels that transport troops, combat equipment and light vehicles. These ships, however, will be used in counterinsurgency and to protect strategic marine assets like offshore oil fields.

These ships (or are they boats?) will be armed with machine guns, according to the media, and are thus useless for surface combat.

These new ships and others on the order book are apparently not designed for either sea control or force projection in distant waters like our Kalayaan Islands.

And they will certainly not be suitable for warfighting, especially against the People’s Liberation Army Navy (PLAN), or the navies of any of the four other claimants to the Spratlys (Vietnam, Taiwan, Malaysia and Brunei).

But, the Navy doesn’t have to outgun the PLAN. It only has to make the PLAN realize any naval engagement will be mutually damaging and not one sided in PLAN’s favor. It’s about credibility.

These small ships, built specifically to control littoral waters (or those close to shore), combine stealth technology with catamaran or trimaran hull forms that allow them to stay afloat in as little as four meters of water.

The PLAN has embraced the LCS as an essential part of its force structure. It has Asia’s most numerous LCS fleet: over 40 of its latest model, the Type 022 (Houbei-class) guided-missile fast attack craft (FAC), have been built and more are building. China has some 130 missile boats in total.

The mission of the fast, trimaran-hulled Type 022 missile boats can be compared to that of jet fighters: their sole reason for being is to destroy the enemy.

For this single-minded task, the Type 022’s main armament is a twin-launcher for anti-ship, land attack or surface-to-air missiles. It can carry up to eight missiles.

These 220-ton boats have a top speed of some 40 knots. The first Houbei FAC was launched in 2004 and some 40 are said to be operational today. Each boat carries a 12-man crew.

The Type 022’s mission is the active defense of China's near seas or littoral areas. They represent China’s attempts to gain greater sea control further from its coast, which can be taken to include our Kalayaan Islands.

The Type 022 is more heavily armed than any Philippine Navy fighting ship. None of our Navy’s ships are missile-armed, including its largest ship, the BRP Rajah Humabon, a frigate.

As for the Navy’s 40 patrol boats, their weapons (heavy machine guns and light cannon) are worthless in surface combat.

The Philippine Navy has nothing like the Type 022—and apparently nothing remotely similar on order under its modernization plan.

The silence of the weak
China’s present economic success has led it to develop an insatiable hunger for resources such as crude oil and strategic metals. Despite the global financial crisis that crippled the U.S. and Europe, China’s economy is expected to grow by eight percent this year thanks to government stimulus packages.

China is widely expected to become the world’s largest economy by the next decade, displacing the U.S. Its GDP is again expected to grow near the 10% mark starting 2010. Its appetite for resources such as crude oil will, therefore, remain unchecked. Only the inevitable collapse of communism in China in the decade beginning 2010 can prevent China's continued military growth and territorial expansion into the Spratlys.

It is inevitable this powerful hunger for resources will again lead China to our door as it did in 1995 when she seized Mischief Reef from us without a fight. China might soon seek to impose its sovereignty on more islands in our Kalayaan Municipality, and that will mean confronting this country on the high seas.

What shall our brave Philippine Navy have on hand to counter PLAN battle fleets consisting of modern missile-armed destroyers and frigates, nimble Houbei-class FACs and virtually undetectable attack submarines when push comes to shove in the next 10 years?

Your silence speaks volumes.
Posted by Art Villasanta at 7:52 AM No comments: